‘When You Know, You Just Know’ & Other Love Lies

“I always imagined this magical moment where the world stops, jazz music plays in the background, and I lock eyes with a beautiful stranger whom, somehow, I’ve known my whole life”

I always imagined this magical moment where the world stops, jazz music plays in the background, and I lock  eyes with a beautiful stranger whom, somehow, I’ve known my whole life. Neither of us needs to exchange any real words. We already mutually understand–instinctively of course–that this is the last relationship we will ever have. He asks for my number and 3 months later we’re married with 2.5 kids. There aren’t any arguments on marriage timelines or how we want to raise our kids. There aren’t any doubts and questionable habits that make you wonder if God seriously intends for a person to mate with just one other human being for life. And there certainly aren’t any intermediary break-ups where both people questioned their rightness for one another. Because, as they say, “when you know, you just know”.

But the day I met Mr. Right-For-Now looked absolutely nothing like what “they say”.

So I kept waiting for the magic “aha” moment when I would suddenly “just know”. It didn’t happen when he first professed his Love for me in a poem.It didn’t happen when I found myself crying gleefully in the shower, overwhelmed by my Love for him. It didn’t happen when he began to break down his emotional barriers just to be with me. It didn’t happen when I chose to put more trust and faith in him than I’ve put in anyone besides myself. It’s been exactly 2 years, 9 months, and 12 hours. And that moment has NEVER happened. I’ve never been completely-absolutely-without-a- shadow-of-a-doubt certain that Mr. Right-For-Now is the only soul on earth for me. So naturally, I began to think my uncertainty means he’s not the one. You know, like that awkward moment when you kiss the frog expecting a prince and he turns into a frog too?  I never got to the fairy-tale “when you know, you just know” moment like they said I would.

Recently, I had lunch with a married mentor of mine and he gave me the most practical bit of insider information. He said, and I’m paraphrasing, certainty is simply an emotion. Therefore, it changes with the wind. When something happens that we’re happy about, we’re sure that a person is for us. When things don’t go the way we thought they would go, then we start to doubt. He assured me that I would never be completely certain because knowing is just a feeling. Today, I may feel like Mr. Right-For-Now is the best decision I ever made. Other days, I might feel like I made a mistake. And that’s normal. But none of it truly matters because marriage requires you to Love another person in spite of how you may feel on a day-to-day basis. 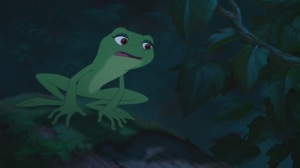 I sat there, mouth agape staring into the distance. At first, I just sat there blankly. Then something snapped inside and I became ANGRY–bloodthirsty almost. Who the fuck came up with that bullshit “when you know, you just know” then, I wondered. I’d waited my whole romantic life for a certainty that would never come!!! I felt bamboozled like a little kid waiting up for Santa only to discover mommy and daddy putting toys under the tree, drinking the milk, and eating the goddamned cookies. I mean next you’ll be telling me a couple can’t really have 2.5 kids!!! This was BY FAR the biggest Love lie of them all since happily ever after. And suddenly I hated every Disney movie and romantic comedy I’d ever seen (except Crazy, Stupid, Love. Completely unhateable movie). Especially the ones where the girl or guy leaves their current girl or guy to be with some other girl or guy that they JUST KNEW they were supposed to be with instead (think Maid in Manhattan or The Princess and the Frog). LIES! LIES! LIES!

When the anger dissipated, I realized how blessed I was to come into this piece of wisdom. My mentor pointed out a most convenient

truth to me. That as humans, we’re too fickle to really know anything. Even our facts are debatable and up to interpretation. Life, by definition, is too unpredictable to know. Mike Tyson once stated, “everyone has a plan ’til they get hit”. And suddenly all of my uncertainty made sense. I only felt unsure whenever he and I faced an issue that seemed unlikely to yield my desired outcome. Him and I, we aren’t perfect. We go THROUGH things. Yet Hollywood likes to paint this picture that Love is easy with the right person (another LIE). So why all this pressure on two romantic partners to know without a doubt that they’re meant to be together?

I decided after that lunch to take the unrealistic pressure off my boo and I. We don’t have to know. But  if you cannot know for certain, then what’s left? You can believe! And I believe, and have believed for a long time, that I am made for Mr. Right-For-Now. He believes he’s made for me. And that’s enough. In the end, I did have one of those Disney moments where I learned I already had what I’d been waiting for all along. Faith in Love is enough.

Summer Rain. Whispers me to sleep and wakes me up again. Sometimes I swear I hear it call my name. You wash away the pain. My summer rain.
View all posts by P.R. Cheek »
← Too Adorable Not to Share
Love Like This →