Twitter Facebook RSS Feed
← 1st Love: The Ugly Truth No One Ever Told Me (Pt. 2)
The First Lady’s First Date →

“31 Ways To Know You’re In The Right Relationship”

Whether it’s a couple walking down the street hand in hand or a story of 25-year-old marriage triumph, I always like to see relationship positivity. And that’s mostly what blogger Karen Civil accomplishes in the post “31 Ways To Know You’re In The Right Relationship“. She writes the post out of frustration with the negative and dismal relationship pieces that we’re all a bit too familiar with. Though I agreed with my sister-blogger’s motives, I had a problem  with the fact that the first 15 ways on her list all have to do with things you don’t do if you’re in the right relationship. Take a look for yourself: 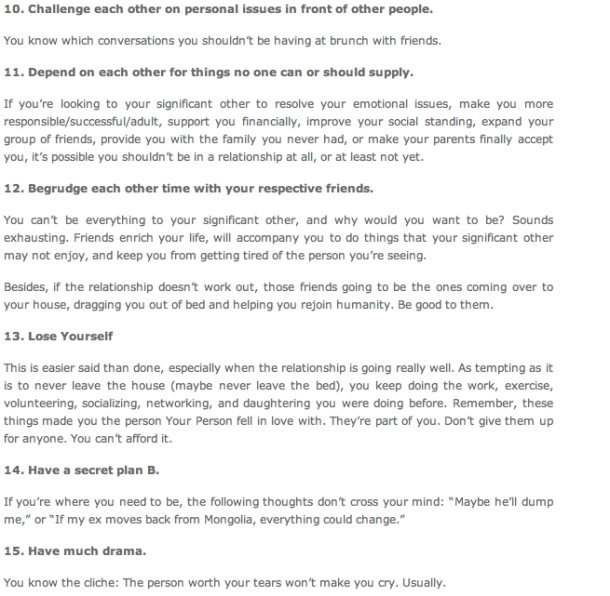 Don’t get me wrong, I get the point she tries to make with all of these. These aren’t healthy behaviors to have in your relationship. But I don’t think it’s a good idea to define a “right” relationship by what it’s not or what doesn’t go on inside of it. It implies that if these things do happen then you’re not in the “right” relationship. I disagree with that wholeheartedly. I, for one, have done several of the things on this “you don’t” list. I have feared, I have hid things, I have snooped, I have thought I was superior, I have stewed, I have lost myself at times…If I keep going there simply won’t be any amount of correct punctuation to list all the things I’ve done and avoid a run-on sentence. But I’ve learned from each and every one of those relationship mishaps and became a better partner because of it! Just because I snooped through Mr. Right-For-Now’s phone before, doesn’t make him and I any less “right”. It just means that in that moment, I succumbed to my distrustful emotions. Even a healthy person puffs on one of life’s cigarettes every once in a while. We are human and we make mistakes in our relationships.

Summer Rain. Whispers me to sleep and wakes me up again. Sometimes I swear I hear it call my name. You wash away the pain. My summer rain.
View all posts by P.R. Cheek »
← 1st Love: The Ugly Truth No One Ever Told Me (Pt. 2)
The First Lady’s First Date →