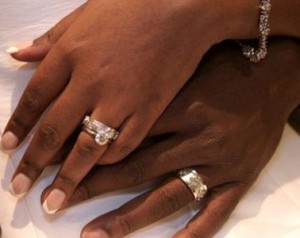 Today, black people have the lowest marriage rate of any racial group in the US.

Marriage. In a society where nearly 50% of them fail, just saying the word can induce a migraine. The first thing it makes me think of is yelling, fighting, and custody. Admittedly, though, I am a child of divorce and have seen mostly marriage’s not-so-pretty side. Then there are the racial statistics that increase the risk of marriage failure if your skin is darker. And nowadays–if you’re black American–the chances of you actually ever getting married are pretty slim. But despite all the bad press, every so often I run into two people that make it seem like the greatest thing in the world. And that is the beauty of marriage, the mystery behind the “M” word–when it works it’s amazing and when it doesn’t work it’s hell.

So what makes a marriage work? Well I asked people and I did some research online. But that only brought up more questions. What is it exactly? Why do people do it? Why don’t people do it? What does it look like when it’s working? What does it look like when it’s failing? Does it only exist in these two extremes–blossoming or failing? Or do some people have average marriages?

As I began to dissect this marriage thing, I started to feel like the man in the yellow hat might come to claim me at any moment (that was a very clever Curious George reference just in case you didn’t get it!) Hopefully this particular curiosity does not kill me, however. Well I guess curiosity doesn’t really kill monkeys, just cats. But I digress. Since this marriage thing could go in so many directions, I wanted basics for now. I figured the best thing to do was ask Google “what should I know before getting married?” And voila. I stumbled upon a little guide from a guy who calls himself “dumb little man.” And his writing style is so exquisitely simple that I had to share it with my readers that might be just as curious as me about life after dating. So here is dumb little man’s “Things to Consider Before Getting Married.”

Summer Rain. Whispers me to sleep and wakes me up again. Sometimes I swear I hear it call my name. You wash away the pain. My summer rain.
View all posts by P.R. Cheek »
← The Ultimate Ultimatum
Dating With Emotional Intelligence →